On the heels of receiving the rare Anampses lennardi wrasse, Quality Marine have received three new aquacultured species of damsels for the first time.

Damsels have long been considered a perfect fish for the beginner hobbyists for their hardiness, good looks, and small to large aquarium applications. In the wild, they are found in abundance.  With that said, sourcing aquacultured specimens can be a challenging as Quality Marine continually tries to expand aquacultured availability of various species of marine livestock in efforts to positivity impact the industry and the hobby as a whole.  With this announcement, it is now possible to purchase some of the more peace loving
damsel fish; Chrysiptera hemicyanea, Chrysiptera talboti, Chrysiptera rollandi. 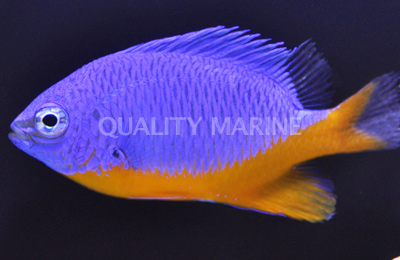 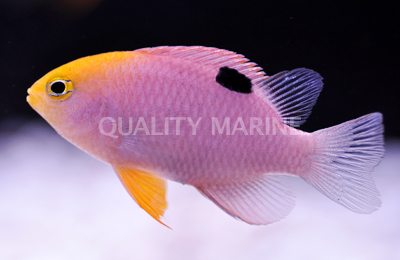 The Talbot Damsel (Chrysiptera talboti) has become very popular due to their unique coloration and small adult size. This species distribution ranges all over the Western Pacific, and was recently recorded in Tonga. The Talbot Damsel’s body ranges from a pink color to a deep purple/blue color with a canary yellow head, which makes them stand out against other damsels. Adults are found in coral rich areas of reef slopes and lagoons. 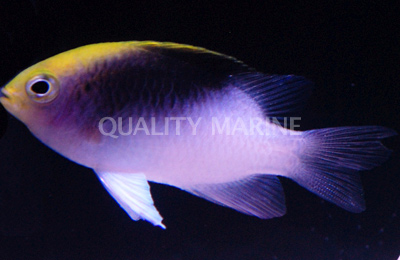 The Black Cap Damsel (Chrysiptera rollandi) ranges from the Eastern Indian Ocean to the Western Pacific Ocean and has recently been recorded in Tonga like the Talbot Damsel. Adults can be found singly or in small groups among coral in lagoons and outer reefs. This beautiful fish is yellow, black and white in coloration.

Species in the Chrysiptera genus are hardy, active.  They generally stay out in the open or swim it the branches of larger coral heads in the reef aquarium.  Additionally these fish do not need to be in larger aquariums and generally speaking they are very easy to care for, making them ideal for just about any aquarium with suitable tank mates.

Like most damsels and as peace loving as Chrysiptera species can be, they are still very territorial and it is recommended that only one Chrysiptera genus is kept in the aquarium unless the tank is larger in size, unlike Dascyllus and Pomacentrus species, which can be added in small groups. For the hobbyist who is looking to add just one damselfish to their aquarium, these characteristics make these fish a great choice. Add live rock or other structures for them to hide in and create territories.  For example, one of our 8 foot x 4 foot coral farm tanks has 2 different species of these fish together and they get along fine.  The fish typically stay away from one another except when it’s feeding time and even then they are preoccupied with eating more than they are fighting one another.  These fish are not finicky feeders and they readily accept prepared and various foods like frozen meaty foods, marine flake and pellets and we have found that they even like to eat algae based food like NannoFlakes that we discussed in our previous article.

No word on what the street pricing is for these as Quality Marine sells to wholesale businesses and retail stores.  If anyone has a list of the many species of marine fish that are now being captive bred then we would love to hear from you!