Trending
You are at:Home»Reef Conservation»Aftermath on the Great Barrier Reef 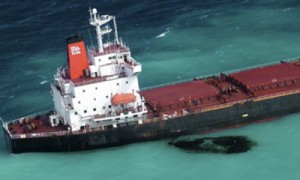 Another update on the incident on the Great Barrier Reef from Yahoo. We reported earlier that the ship had been successfully removed from the reef, but a lasting impression has been left where the ship impacted. Not only was there a two-mile scar on the reef, but paint on the ship was scraped off on surrounding corals and substrate. This paint is dangerous to marine life due to its anti-fouling capabilities and heavy metal content. Commercial ships use this paint to prevent organisms from settling on the bottom of the ship. These organisms (barnacles for example), end up creating drag on the boat, slowing it down and causing it to use more fuel. It is feared that the area where the paint has been deposited will not be able to support new reef life, further adding to the already massive issues this reef is facing.