Trending
You are at:Home»Reef Conservation»Oil Spill on the Great Barrier Reef 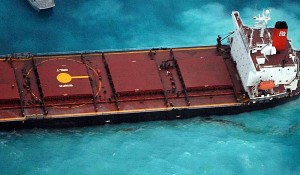 The ship, a 755-foot Chinese coal carrier named the Shen Neng 1, ran aground late Saturday evening on a pristine portion of the reef while traveling at full speed. Patches of oil were seen around the ship earlier this morning and officials fear that more may be released if the ship breaks apart. A chemical “not expected to have a lasting environmental impact” was sprayed on the oil in order to disperse it.

This event absolutely has me outraged. The Great Barrier Reef is the single largest reef in the entire world and irresponsible shipping companies are allowed to drive all over it in ships containing extremely harmful substance. This, along with the Clipperton Incident should open up the eyes of the shipping industry. Officials should realize that the small amount of time they save by cutting through coral reefs is negligible when compared to the potential damage their trip could cause.

Photo and original story taken from the LA Times.