Trending
You are at:Home»General»PETA Not Too Happy About Aquarium at Ballpark 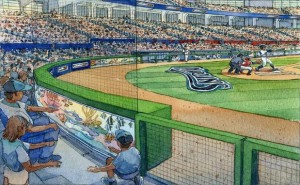 Aquariums at the Florida Marlins Ballpark

It should come as no surprise that PETA (People for the Ethical Treatment of Animals) is not too happy with the Florida Marlins, who are planning on incorporating two large saltwater aquariums into the backstop at their new ballpark. Their argument is that the livestock in the tank would be subjected to several stressful factors, and should instead replace the tank with a video screen with footage of tropical fish or even fish inspired art. I can’t say that I disagree with PETA. Their arguments are actually quite sound:

Being exposed to the loud crowds, bright lights, and reverberations of a baseball stadium would be stressful and maddening for any large animals held captive in tanks that, to them, are like bathtubs.”

Thanks Karlo for the heads up!