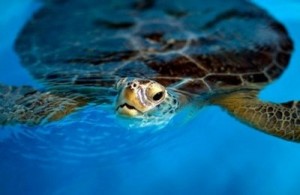 Some more news from the BP Oil Spill. According to an AFP story on Yahoo!, animal welfare groups AWI, Center for Biological Diversity, Turtle Island Restoration Network and Animal Legal Defense Fund are suing British Petroleum for burning sea turtles. That’s right, they are burning sea turtles. And not the regular old run of the mill sea turtles. No, BP has to go and get one of the rarest, the Kemp’s Ridely sea turtle. OK, I may be over-dramatizing the situation, but BP is being sued for using “controlled” burns to get rid of some of the oil. Sea turtles and other animals are getting caught up in the boons meant to trap the oil by accident. The crew members on the boats then set the oil on fire, which also burns anything trapped in the boons. The animal welfare groups also mentioned in the original article that the BP oil spill has caused 430 sea turtles, all from endangered species, to perish.