Trending
You are at:Home»Reef Conservation»Bluefin Tuna Can’t Catch a Break 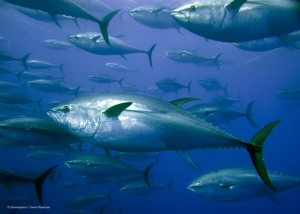 Nature is reporting on their blog that The International Commission for the Conservation of Atlantic Tunas (ICCAT) has recently voted on the 2011 quota for the bluefin fisheries. The commission voted to reduce the quota by a mere 600 tons, which still allows almost 13000 tons to be harvested annually. This tiny reduction is receiving a lot of flak from the scientific community because over the last 40 years, tuna populations have absolutely plunged in numbers. Adult stocks have decreased by 72% in the eastern Atlantic and 82% in the western Atlantic over that period.

More disappointing news on these fish came about earlier this year when Monaco unsuccessfully tried to get bluefin tuna placed on the endangered species list. This action would have banned international trade in tuna, but the ICCAT refused this notion as the tuna are far too important economically.