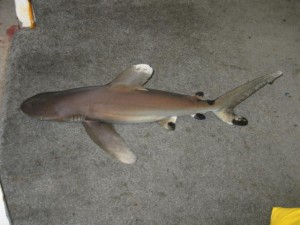 Just yesterday we discussed the fact that bluefin tuna catch quotas were only going to decrease by a slight amount. The International Commission for the Conservation of Atlantic Tunas (ICCAT) voted to decrease the quotas by a mere 4% for 2011, despite quickly dwindling tuna populations. Sharks and sea turtles, however, got much better news according to a recent CBS article. Conservation groups worldwide agreed that delegates at the conservation conference “took steps in the right direction” to protect oceanic whitetip sharks, various species of hammerhead sharks, and shortfin mako sharks.

Because sharks are becoming targeted more frequently for their fins, many shark populations have declined dramatically. Some species have even declined over 90% in some areas. To help battle these trends, conference delegates voted to ban fishermen from catching and keeping oceanic whitetips, while also placing limits on several species of hammerhead and requiring data to be kept on shortfin makos. Additionally, fisherman will be required to carry special gear to remove hooks from sea turtles that are accidentally caught. Currently, US-based shrimpers are required to use turtle excluding devices (TEDs) in their nets as they trawl, but having something similar implemented worldwide should also improve turtle numbers.

Though the news for bluefin tuna was bittersweet, the regulations seen on oceanic whitetips is fantastic, and we can only hope this ban on sharks continues to grow.