Trending
You are at:Home»Aquarium Photography»Cell Phone Reef Photography with Apps 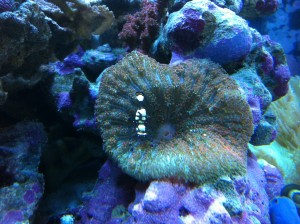 Last October, I wrote an article about cell phone reef photography. At the time, I was rocking an older Blackberry, whose camera wasn’t all that great. Sure, it had some features and adjustments that I could tweak, but it was very limited. Very recently I upgrade to the iPhone 4. Many of you have used the cameras on these to photograph your aquariums I’m sure, and I wanted to dig a little deeper into the features of this particular camera, as well as the use of apps to make your images really exciting.

The iPhone 4’s camera shoots gorgeous 5-megapixel photos and stunning HD video. I would also like to note that 0ther camera phones on the market are capable of 8-megapixels. Right out of the box, the images are noticeably better than my previous cell phone camera. The images are very crisp and full of detail. I did find it to be a bit odd though, that you couldn’t really adjust the settings on the camera. You could turn the flash on or off, but there was no zoom function or exposure settings that I could find. However, the phone has a nifty feature for handling exposure, in the form of HDR. Basically, the HDR (High Dynamic Range) takes multiple pictures (3 or more), each with different exposure settings. It then combines all of the images into a single, composite image. The result can be stunning photos, but that is of course not guaranteed.

Keep reading below for camera apps. 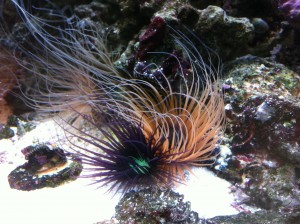 Apple applications, or apps, are where the camera’s capabilities will really expand. For starters, free camera zoom software can be used. The zoom isn’t the greatest, as it is purely digital, but it can bring interesting subjects in a little closer. Other apps, most of which will have to be purchased, can add artistic touches to your photos, such as black and white, color exclusion or enhancing, and many more. A favorite that I have found is the ColorSplash app. Basically, it allows you to turn the entire photo to greyscale, also giving you the ability to highlight only the areas of the photo you want to have color. This photographic technique has been around for a long time, but never has it been so easy to use. Other applications allow you to shoot with multiple “lenses”. With the various lens software, you can use a digital macro lens to get better closeup photos. I have even seen actual lenses that you can attach to the stock lens of the phone’s camera. I haven’t personally tried the digital or add-on lenses, but I will be exploring them to some extent at a later time.

Image with the use of ColorSplash 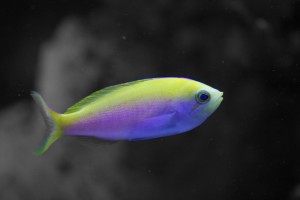 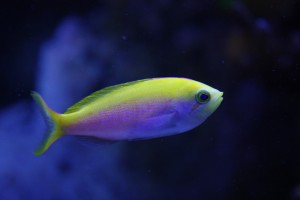 With the iPhone or some other super smart phone currently available, we can all take great images and video from our local fish store, public aquariums, or even our home tanks. Toss on a few apps and you’ll have some really nice photos without having to buy high dollar cameras and additional lenses.