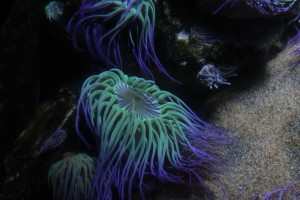 While in London, I managed to carve out enough time from all of the touring to visit the London Sea Life Aquarium. The aquarium itself was somewhat disappointing, but it had several reef aquariums that made the trip worthwhile. The main display aquarium was pretty typical, with virtually no lighting, a tunnel going through the exhibit, and tons of large schooling fish and sharks. The interesting thing about that tank was the dead whale skeleton, fake of course, that was used in the display. It added something new to the same old scene. 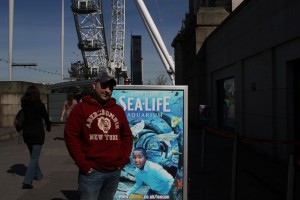 The coral and saltwater fish tanks in the London Aquarium were hit or miss. There were a small handful that really stood out, but there were also several that were too dimly lit for good pictures, had more than enough Aiptasia, or had just the wrong mixture of animals. For example, there was a really neat pair of cylindrical tanks that were joined together by two tubes. The problem with these tanks is they were full of purple tangs, and lots of them. As most of know, purple tangs are pretty aggressive fish, especially to other tangs in the Zebrasoma genus. The two cylindrical tanks had a least 20-30 purple tangs, and some of them really showed the byproducts of conspecific aggression. Torn fins were everywhere. There was three reef tanks that I really enjoyed, including one with an Achilles tang, one with a ton of rose bubble tip anemones, and the last with a small school of Bangaii cardinals.

The London Aquarium had a great deal of freshwater displays, including piranha, freshwater sliders (aka turtles), and lots of planted tanks. The freshwater displays were much nicer, but I mostly only care for saltwater tanks, so the beauty of these tanks was most likely not fully appreciated…though they were very nice.

Overall, the London Aquarium was a little bit of a let down. Like I mentioned previously, the dark rooms and dimly lit tanks made photographing the fish very frustrating. On top of that, the displays weren’t spectacular and the whole facility felt like it was geared more toward the younger audience. The price for one adult was £18 (pounds), which translates to approximately $30 per person. A bit overpriced for a mediocre public aquarium, but the bright spots in the facility make it worth the trip.

I am still currently overseas, so I’ll be cutting the post short. We’ll post more information and images once we get back to the states. 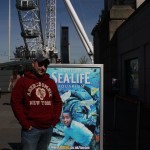 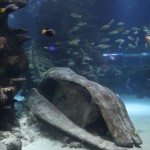 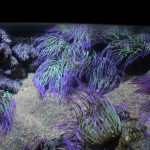 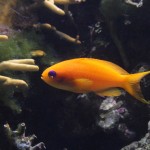 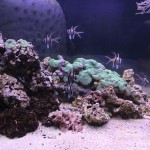 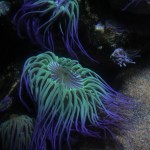