Trending
You are at:Home»Reef Conservation»Ships Runs Aground on Philippine Reef 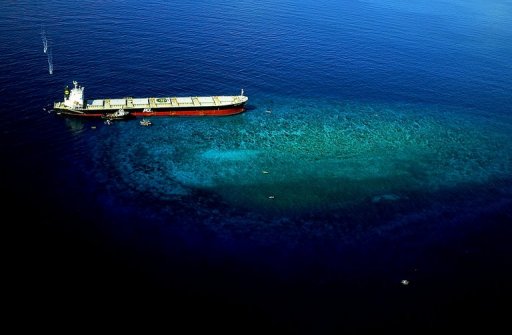 Some terrible news out of the Philippines. A foreign cargo ship has apparently run aground and is currently stranded on a protected coral reef. The MV Double Prosperity, a name which obviously doesn’t fit, is a Panamanian ship that was transporting 65,000 metric tons of coal from Australia to India. The 743 foot long ship struck Bakud Reef in southern Philippines, and about 3/4 of the ship is actually still stuck on the reef in about six and a half feet of water. The fact that the ship is stuck on the reef isn’t even the worst part. Officials estimate the ship will remain stranded on the reef for at least three weeks, as refloating the vessel will be very difficult given the fact that it is in roughly six feet of water. And that time frame is weather dependent, so it could take much longer. Officials have also expressed concern over the ship’s fuel possibly leaking, so inflatable booms have been brought in to contain any potential spill. Marine biologists have been called in to assess the damage to the environment, and authorities will seek compensation from the ship’s owners regardless if any significant damage has actually been done.

To read the original story, please visit the AFP. I also wanted to thank Tal Sweet for sharing this story.