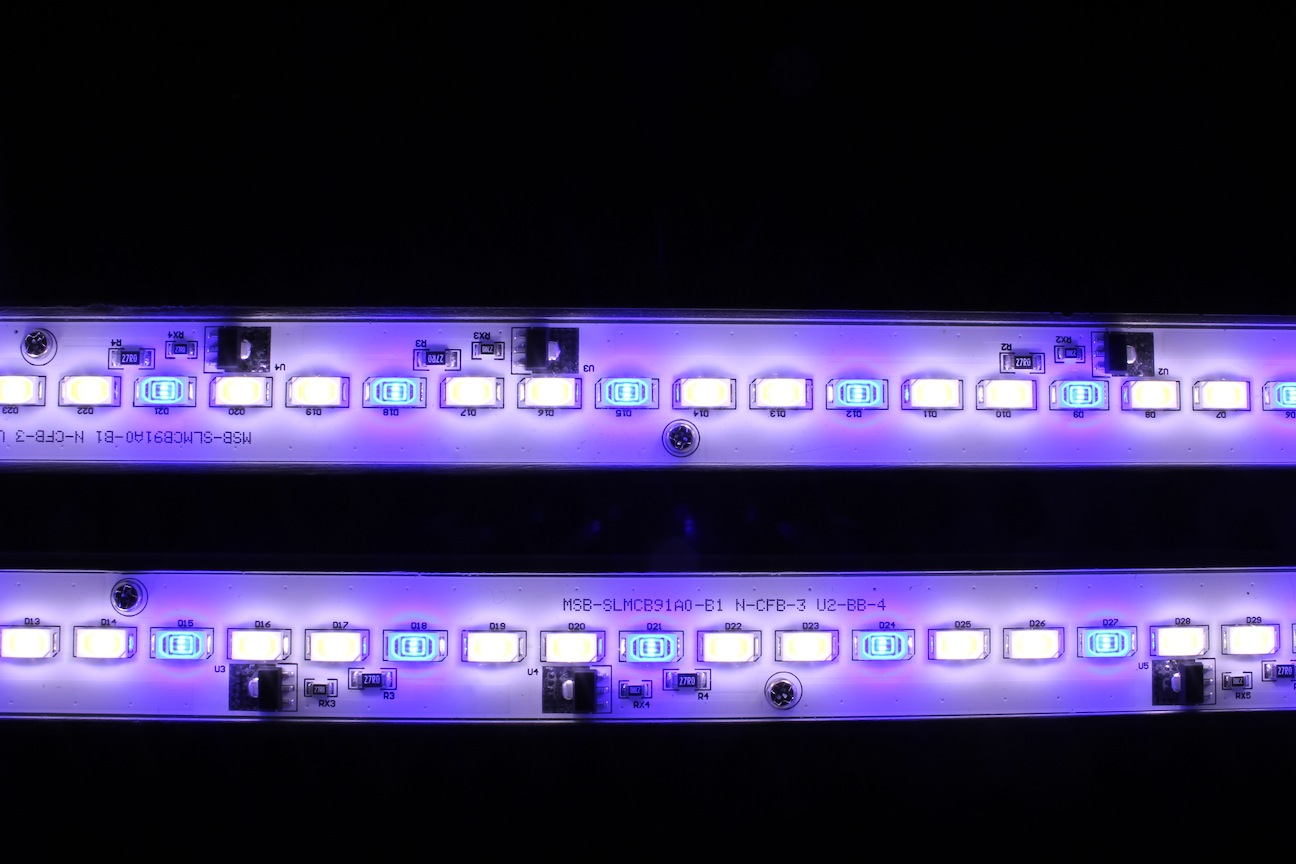 Over the weekend we got to do some extensive hands on playing with a pair of TrueLumen Pro LED strips from Current USA. While you might recall that our initial first impressions of the strip lights were good, our review wasn’t anywhere near complete until we got some PAR measurements. With that in mind, we placed both 36″ long strips over a 90-gallon rimless aquarium and went about measuring the Photosynthetically Active Radiation at various depths and different places in the tank. The lights being tested were the Marine Fusion 12K White/453nm Actinic LED strips, and the PAR meter being used was the Apogee Quantum MQ-200 PAR Meter. We measured the output of a single TrueLumen Pro, as well as the pair. The maximum PAR reading was noted, and an average of readings at a particular depth were recorded.

Keep reading below for the data we collected.

Starting off our tests, we waited until the sun went down and we made sure to kill all the lights in the room. I feel this is an important step at reducing light pollution from other sources, allowing the PAR meter to take a more accurate reading. The first TruLumen Pro was then placed over the aquarium and allowed to run for several hours. This would allow the strip to arrive at its typical operating temperature. Then we started measuring the output of the single LED strip, starting at the bottom of the 24″ tall aquarium and working our way up in six inch increments. A table of the results can be seen immediately below.

After thoroughly testing the single LED strip, we turned it off and allowed it to cool to room temperature before proceeding with the dual strip testing. After several hours of waiting, we turned on both strips at the same time and allowed both of them to arrive at their perceived operating temperature. Both strips were placed within 2 3/4″ of each other, which is roughly the same configuration most T5HO fixtures use with their bulb layout. As with the first test, we placed the PAR meter’s probe at the bottom of the aquarium and took measurements at six inch increments. A table of results can be seen below. Please note that the measurement at the surface was excluded for this test. This is due to the fact that two strips were used instead of one, and the PAR meter probe cannot capture all of the light from both strips in a meaningful way. During the first test, we placed the probe directly under the single strip to arrive at our number. If we were to do that in the dual strip test, the number wouldn’t change because we would still be reading the PAR under just one strip. Additionally, if we were to place the probe equidistant from the two strips at the surface, the number would be extremely low because there is so little distance from the water’s surface and the LED strips. We would be measuring the outer edge of what each light is emitting, resulting in a low number.

When performing our measurements, we did notice one thing that should be discussed. During our single strip test, the PAR meter’s probe read lower numbers when placed directly under strip than slightly to the left or right of center. We initially assumed there was some light reflecting back into the aquarium from the front pane of glass, but we were able to see the same phenomenon when taking measurements on the back side of the light. The back of the tank is an area where less light would get reflected back due to the live rock being in between the probe and the glass.

As for the color being emitted from each strip, the tank took on a very crisp white. The actinic was somewhat noticeable, but overall the color was just a little too white for me. This of course is just a personal preference, and the desired color spectrum can be achieved by using the Deepwater Blue TrueLumen Pro Strip. Overall, the Current USA TrueLumen LED strips are very bright and are easily suitable for mixed reef aquariums and they are certainly a product we are quite impressed with.