Trending
You are at:Home»Aquarium Food»ReefPearls Now Available in Larger Size 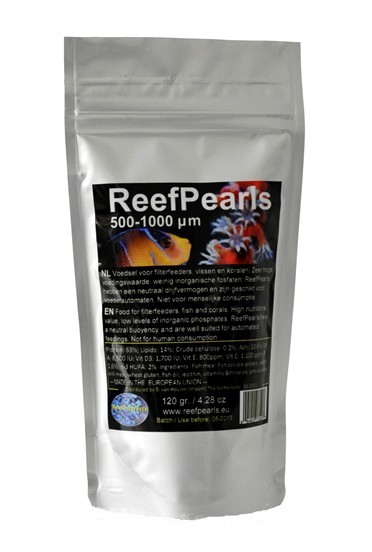 A while back, we were shown a new coral feeding product called ReefPearls. The neutrally buoyant food is said to mimic plankton and be highly nutritional, as it contains micro-encapsulated particles that remain stable in the water column for up to 24 hours and do not leak nutrients back into the water. Originally only offered in a size range of 5-200 microns and geared toward corals only, Reef Interests has developed a larger particle food with small fish and LPS corals in mind. Coming in at 500-1000 microns, this food is nearly identical to the smaller version except in size. It is a dry food that can be used in conjunction with an automatic fish feeder and it is recommended to feed the inhabitants of your aquarium three or four times per day. Both sizes of the ReefPearls are currently available through Aquarium Specialty, and the larger version will have a retail price of $15 in a 120 gram package.