Trending
You are at:Home»General»Saltwater Aquarist Meme Describes Us Perfectly 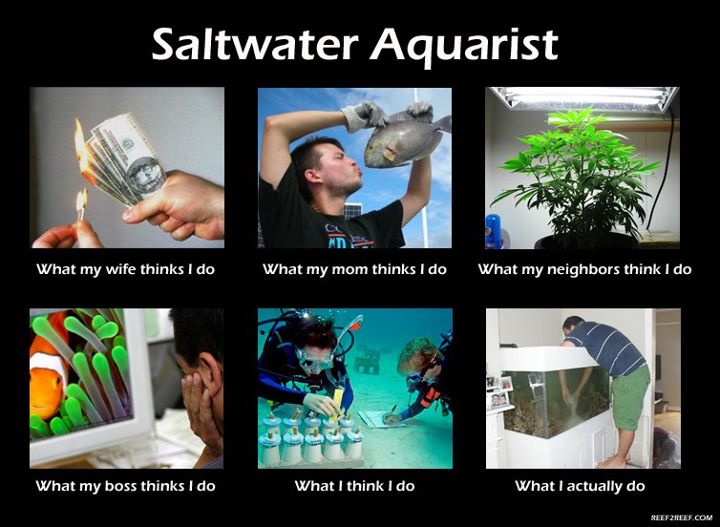 Being a fun and dynamic way to get a funny point across, Internet memes are all the rage these days and we’ve always curious as to when they would invade our little niche of the online world. Over the past several months, a large number of these often funny or bizarre aquarium related graphics have shown up, but this recent creation by David Hammontree of Reef2Reef really speaks to us. The image is based off a wildly popular “What People Think I Do” meme, and I dare anyof you to deny that any one of those scenarios depicted above describes you to a “T”. I know none of us could. As a matter of fact, I’ve got a pretty funny story that goes hand-in-hand with the “What my neighbors think I do” aspect of the meme above.

Back in my fresh-out-of-college days when I was living in a teeny tiny apartment, I had a 180-gallon reef tank. It took up a huge majority of floor space, and was positioned directly across from a large sliding glass door decorated with the standard vertical blinds. The bright light from the T5HO fixture would always shine through those blinds, regardless of whether or not they were closed. And with the apartment facing the parking lot of the apartment complex, many people would stop in their tracks and ponder about the blue glow being emitted from behind the blinds. Most of the time, people just stared momentarily before going about their business. However, one individual actually knocked at our door with a few questions. No, it wasn’t a cop, but it was a perpetual party-goer asking if we were “partying in here or what”. He obviously thought we were growing some sort of “vegetable”, but I kindly told him it was an aquarium, which he could see from the doorway. A bit disappointed that he didn’t find a good time, he gazed at the aquarium before shaking our hands and walking away.

It was an unusual encounter, but like we said, it matches up perfectly with the “What neighbors think I do” image in the above meme.