At last year’s MACNA, which seems like forever ago, AquaIllumination unveiled their brand new Vega LED module (then under the codename “Phoenix”). For obvious reasons, the light stirred up a great deal of chatter, which was only  elevated to new heights when a video demonstrating the Vega Color module leaked onto the web. Speculation has run rampant about what the light would offer and when it would become available to the masses, and we’re happy to report today that the Vega has officially gone on pre-order and a little more information has been revealed.

The new AI Vega will come in two different models: the AI Vega and the AI Vega Color. Both models will be offered in white and black housings, and both will have an expected retail price of $499 per module. The difference between the two, as the name suggests, is the LEDs being used in each. The AI Vega will sport 4 Cree XM-L Cool Whites, 8 Cree XP-E Royal Blues, 4 Cree XP-E Blues, and 4 Osram Olson Deep Blues. The AI Vega Color, on the other hand, will use two fewer Cree XP-E Royal Blues (or 6 in total), but will make up for it with one  Cree XP-E Green and one Osram Oslan Deep Red. And of course, if none of this is to your liking, a wholly customizable AI PowerPuck can be purchased later on down the road.

Directing the light into the aquarium is a series of 80 degree optics, which is a bit of a difference over the stock Sol modules that use a mix of 40 and 70 degree lenses. The wider optics will obviously spread the light out and blend the colors a bit more than the tighter lenses, which also means that water penetration will be restricted to some extent. Rest assured, however, that these lights will be able to penetrate the depths of most aquaria. 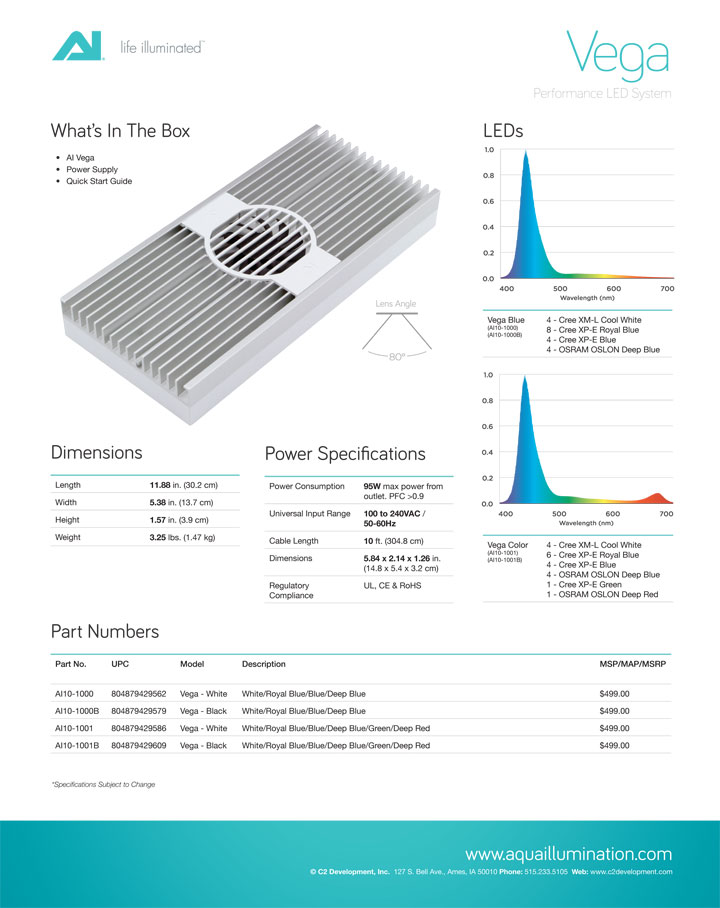 The Vega is currently listed on Salty Supply if anyone wants to go ahead and reserve theirs today.