Trending
You are at:Home»General»Boy Finds Whale Vomit, Rakes in $63000 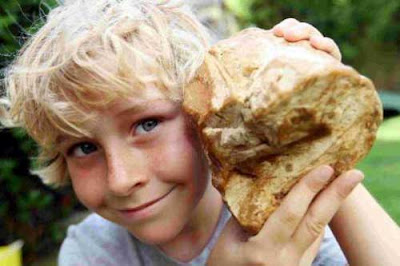 Here’s an interesting story that we’ll just file under weird and unusual. An 8-year-old boy was strolling along a beach at Hengistbury Head in southern Britain and came across what he thought was just a big, interesting stone. Of course, being an inquisitive young mind, he picked up the stone and eventually took it with him. Little did he know that he was holding an extremely valuable piece of ambergris, which is actually solidified sperm whale vomit. The price on this whale throwup rock? This ambergis, which weighs little more than a pound, is estimated to be valued at a whopping $63,000!

So what on earth makes whale vomit so valuable. Interestingly, it’s used as an additive in perfumes to prolong the scent. Charlie Naysmith, the whale vomit discoverer, and his family say that they are still unsure as to what to do with the profits from selling the stone, but apparently they are considering building a house for animals.

If you think $63 grand for whale vomit is a bit pricey, there’s another story out of Australia in which a man reportedly found a 32.5-pound ambergris stone, which had an estimated value of nearly $300,000. Nothing like finding some whale vomit to buy yourself a really nice aquarium setup, a new house, or a high end sports car. One can only dream.