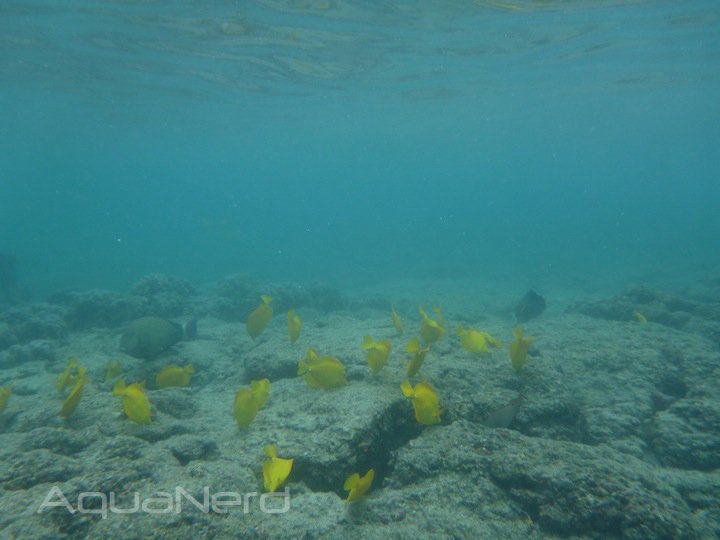 Yellow Tangs spotted off the coast of Kona

With the anti-aquarium legislation in Hawaii basically getting nowhere this year, the normally volatile hotbed of anti-aquarium activists in the island state has been suspiciously quiet. We haven’t heard from our beloved friends Snorkel Bob and For the Fishes in a while (sarcastic tone implied), but that doesn’t mean they haven’t been busy. In fact, they’ve been toiling away at their latest route to stop aquarium collection, which comes in the form of a new lawsuit filed just yesterday against the Hawaiian Department of Land and Natural Resources (DLNR).

According to various reports, the joint lawsuit by citizens and conservation groups is designed to force the DLNR to protect Hawaiian reefs and coastal areas by forcing the state to comply with its own Hawaii Environmental Policy Act (HEPA). This would require the DLNR to conduct environmental reviews examining the cumulative damage to the reefs by aquarium collection. While the reviews are being conducted, the suit states that all existing aquarium collection must be stopped and the DLNR must not be allowed to issue commercial aquarium collection permits.

Listed under the plaintiff section of the lawsuit are a few familiar faces, which include Rene Umberger, Mike Nakachi, Kaimi Kaupiko, Willie Kaupiko, Conservation Council of Hawaii, the Humane Society of the United States, and the Center for Biological Diversity. Besides the usual rhetoric, the complaint claims that the DLNR has essentially never complied with HEPA, which has resulted in devastating fish loss in near shore waters.

Interestingly, the suit doesn’t seem to hide too far behind the veil of conservation purely for conservation’s sake. Instead, the plaintiffs attack it from a recreational diving stance, claiming that the aquarium trade has severely depleted wild fish populations around Hawaii, causing “harm” to regular divers like Umberger. Yes, the “harm” terminology is actually used here, with the lawsuit claiming that:

Ms. Umberger’s recreational and aesthetic interests are harmed by DLNR’s failure to assess the environmental effects of the State’s reefs of issuing the challenged permits because she has noticed fewer individuals and a decreasing variety of fish species that are collected for the aquarium trade on reefs where she dives, and she has observed a decline in health of reef ecosystems in areas that are open to collection.

The other civilian complaints in the lawsuit are based similarly on observations and a perceived loss of income because of the aquarium trade and DLNR’s inability to control it.

We will be covering more of this new lawsuit as more details emerge and as we get a chance to dissect the legal documents associated with it. If you would like to view the suit, please visit: Earthjustice Aquarium Collection Complaint.