Trending
You are at:Home»Uncategorized»Salem Fisherman Hauls Up Super Rare Orange and Black Lobster 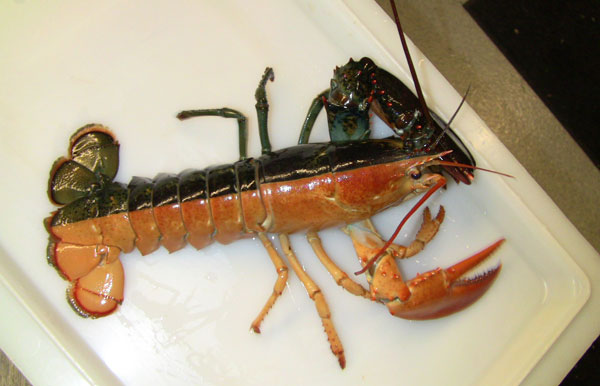 Now this is just plain cool. A lobster fisherman operating in Beverly, Massachusetts recently hauled in the catch of a lifetime. While getting in a little lobster fishing before Hurricane Sandy rolled in, Dana Duhaime noticed a particularly unusual lobster in one of his traps. Not wanting to see this incredibly rare and colorful lobster become an expensive dinner plate item, Duhaime donated it to the New England Aquarium. Called a “split lobster”, obviously for its color pattern, the lobster will a couple other rare lobster at the aquarium, which include a blue lobster and an orange lobster. Now that’s one rare collection of crustaceans.

According to the New England Aquarium’s blog, from which this story and news originates, the split lobster is so rare that only one in every 50-100 million lobsters has this coloration. In the last ten years, a total of four split lobsters have been found in Maine, Road Island, Nova Scotia, and Prince Edward Island. Besides the rarity, officials at the aquarium couldn’t help but revel in the fact that this black and orange lobster showed up just in time for Halloween.

And before you start thinking the image was photoshopped, there is a video also included.