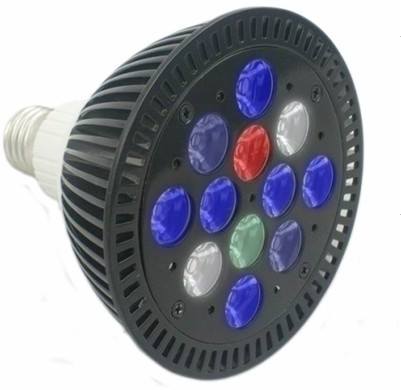 Evolution LED is adding to their LED lineup once again, this time with a new PAR38 called the Evo Spot Color. This isn’t the first offering of an Evolution spotlight, but it is a totally revamped, full spectrum model for 2013 and it sports a deep blue color that will make the color from just about any coral pop right out of the tank. This is due to the overwhelming amount of blue LEDs, though a few other colors are mixed in to give better balance to the overall look. The Evo Spot Color features four blue 455nm, two true violet 420nm, two cool blue 470nm, one deep red 660nm, one cyan 495nm, and two neutral white 6500k emitters. This form factor allows for a total of twelve LEDs driven to 3watts each, bringing the total consumption to around 36watts. The emitters are outfitted with 90 degree optics for good spread and depth penetration.

The new Evo Spot Color will be introduced at a pre-order price of $79, and units will start shipping October 15th, 2013. After the introductory period, we expect the price to climb to over $95, which is where most PAR38 lamps are offered. Lastly, the lights come with a 2 year warranty, which is always comforting.