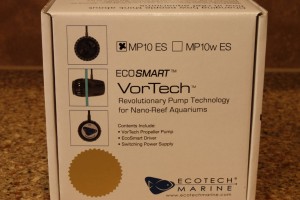 We were recently sent an EcoTech Marine VorTech MP10w with the EcoSmart controller from our newest sponsors Aquarium Specialty for a product review. Though we haven’t had a chance to fully explore all of the features of this spectacular little pump, we did want to share our first impressions. Upon opening the package, I immediately went for the controller. I’ve played with these in the past and the one thing that always impressed me was the quality. The trio of buttons buttons, LED lights, and the knob all feel solid and they all function very well. The buttons even appear to be waterproof, though I have no plans on testing this notion. Moving on from the EcoSmart controller, I then gazed at the pump itself, which is remarkably small. Don’t let its small size fool you though. It puts out some serious flow, but a little more on that later. The pump easily fits into the palm your hand, which is great news for the nano enthusiast who doesn’t want giant powerheads in their aquarium. 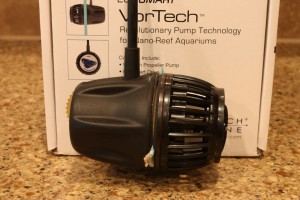 After the initial inspection, I put the VorTech MP10 into our 80-gallon frag tank. I unplugged every piece of equipment except the lights, then turned on the tiny VorTech. I was extremely amazed at how much surface agitation and overall water movement this pump emitted. On “Constant Speed” mode and set to full blast, the pump flow hits 1,575 gallons per hour. Though the flow is wide and diffuse, I was able to see plenty of water movement on the opposite end of the tank, which was four feet away. After gathering myself from the initial amazement, I  started to tinker with the different flow modes on the controller. Though I initially doubted the efficiency of the wave creating modes on such a large tank, I decided to try them anyways. Still with no other equipment powered on, I moved into “Short Pulse” mode. The wave effect wasn’t as drastic as you see in all of the YouTube videos, but I was still able to get about a 2 inch wave after only a few seconds. I assume that I could get a much larger wave motion once I’ve had a chance to play with the controller and find the sweet spot.

Continue reading below for the VorTech’s noise levels, controller usage, and our closing thoughts. 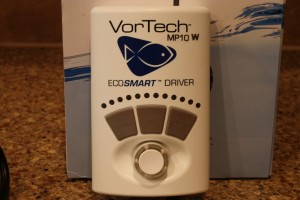 The one thing I noticed about this pump that could be a potential downside long-term is the noise level. The pump was by no means loud, especially in relation to the protein skimmer. In fact, with all of the equipment on, the VorTech wasn’t even noticeable. However, with all of the equipment off, you could hear the motor speeding up and slowing down from several feet away. In all fairness though, the acrylic on the frag tank was quite thick and I was unable to use the rubber gasket that goes between the pump’s dry side and the aquarium. From my past experience with the Gen 2 VorTech MP40w that I had on my old 180-gallon reef, the rubber gasket makes a huge difference in noise. Another factor that contributes to noise is the age of the pump. Every VorTech I’ve have ever owned has been louder straight out of the box than a week or more down the road. This may not be the same experience others have had, but it’s something I noticed on equipment that I have used. 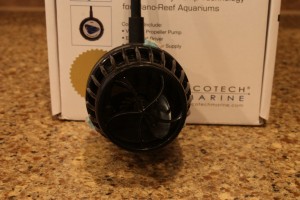 The other thing that could be a little frustrating is the flow modes and finding out how to use them. None of us are as patient hobbyists as we should be, and the casual user might not be able to figure out the controls in the first few minutes of use. Luckily, EcoTech Marine has included a very well written and illustrated instruction manual. I know us guys don’t think we need instructions, but they really do help if you read them while you are tinkering with the EcoSmart controller and all of the flow modes. The instructions explain everything from setup to disassembling, and everything in between. Each and every flow mode is listed and described, including how to get them working on your pump.

So far, I’m very impressed with the performance of this pump. It is extremely tiny, though it does a good job of handling an aquarium that is far larger than it was designed for. I wouldn’t recommend using the pump on a four foot long aquarium (that realm is for its big brother the MP40w ES), but it will handle nano aquariums with ease. We will continue to monitor the pump’s performance and we are hoping to get it working on a tank more suited to its capabilities (cough, possible tank build articles in the future, cough). So be sure to stay tuned for updates on this pump, as well as other aquarium equipment we review.