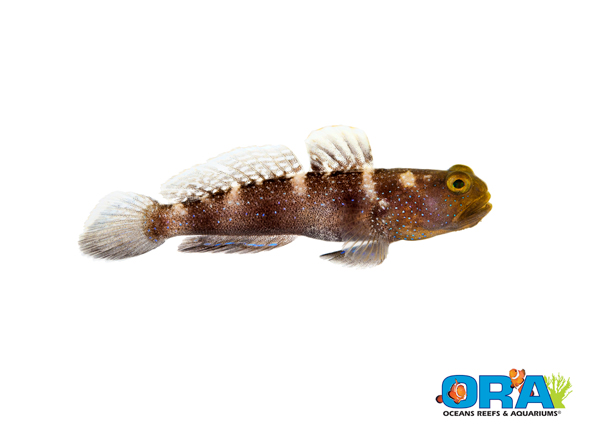 Oceans Reefs & Aquariums has been very very busy over the last month or so. Since the beginning of December, the aquaculture experts have released two new fish (the Eastern Hulafish and Yellowstriped Cardinal), along with a gorgeous algae and even a brand new coral. And they are continuing with their strong performance in 2014 with the release of yet another new fish, the ORA Blue Fin Watchman Goby (Cryptocentrus fasciatus), which was just announced earlier today on their blog.

Somewhat similar to the yellow watchman goby (C. cinctus), the blue fin watchman are only subtly different from their yellow cousins. Despite being predominantly grey in coloration, the blue fin gobies can take on a more yellow appearance, which of course depends on the environment in which it resides as well as other external cues. So, to better distinguish the two, you have to look at other key differences. The blue fin is a tad larger than the yellow watchman, and its dorsal and anal fins have more of a blue coloration to them (hence their name). Additionally, the fish’s body is usually adorned with iridescent blue stripes and dots, as well as patterns of white, black, or brown.

The blue fin watchman isn’t an entirely new fish to the aquarium community, as Proaquatix raised them to a commercially viable number years ago. Still, it’s great to see ORA adding them to their lineup, as it is important for the aquarium hobby that more species become increasingly available in captive bred form.