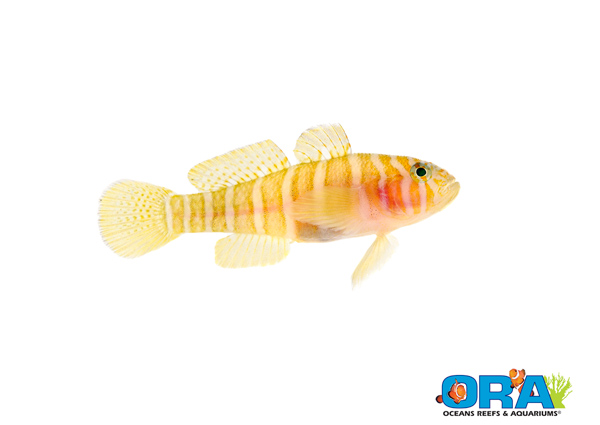 What better way to celebrate Father’s Day than to show off a newly aquacultured fish species from the always busy fish breeders at Oceans Reefs & Aquariums? Like the proud papas they are, ORA is gushing all about their new Girdled Goby (Priolepis cincta) in their latest blog post, sharing all the joys and unfortunate pitfalls that fish parenthood has brought with this new goby. This goby was first raised much earlier in 2014, marking the first time that P. cincta has been bred in the hobby. Unfortunately, long larval stages, challenging feeding requirements, and conspecific aggression have sort of marred the normally joyous process of breeding a new fish.

Despite these challenges, ORA breeders pressed on and eventually raised enough fish to make a viable commercial offering. The first batch was shipped to Drs. Foster and Smith for their help in securing fish for ORA’s broodstock, and retailers will start to see them show up on their availability lists, though the gobies are not expected to be a regular offering.

Which brings us to our next point, and we apologize in advance for it being a long one.

ORA has bred numerous different fish species, with the popular ones being clownfish, cardinalfish, and dottybacks. Every once in a while, however, they focus their efforts on a fish species that isn’t so popular. This focus on the not-so-popular fish is intentional some of the time and somewhat accidental on a few others. On the “accidental” front, it’s common for a popular aquarium fish to not be such popular once they are aquacultured. Take a look at the ORA Mandarins for example. They are intensely popular fish in the hobby, and ORA started breeding them in captivity, making them commercially available in relatively large numbers. But they flopped. Not because ORA failed to deliver a solid product, but because hobbyists wanted cheap, wild-caught fish. The captive-bred individuals were more expensive than their wild counterparts and, well you know the rest of that story. And this story has played out for other species as well.

As for intentionally breeding fish that aren’t in the limelight, there are numerous moves from ORA that have left us all a bit curious. Take the ORA Eastern Hulafish. I’ve never seen one at a fish store, they aren’t necessarily ideal fish for a warm reef setting, and ORA never had a ton of them available. So why breed them in the first place? The question to that is two-fold. For one, unknown or relatively unpopular fish might be a huge commercial success, so might as well give them a try, invest a little time and money, and see how it goes. On the other hand, and the most important aspect in my opinion, is that breeding random species like the hulafish or the girdled goby that lets ORA breeders learn so many valuable lessons. You can never truly gain anything by staying with what you are familiar with, and anything learned by branching out could be applied to other species that are either already being bred en masse, or ORA is having difficulties with, or just a another fish down the road.

That about sums up my standpoint nicely, and we applaud ORA for not staying within a conventional box.